Historians date the beginning of what became the Hanseatic League to the rebuilding of Lübeck by Henry III, duke of Saxony (Henry the Lion) in 1159 after the city had been destroyed in the great fire of 1157. In particular, Henry’s Artlenburger Privileg of 1161 in which the Lübeck merchants were to be legally equated with the Gotland merchants who had dominated the Baltic Sea trade until this time.

Prior to the founding of the Hanseatic League, Scandinavia had been the main force in Baltic trade, having established trading centres at Birka, Haithabu (Hedeby), and Schleswig in the ninth century. Visby, on the island of Gotland, had been the main centre in the Baltic before the establishment of Hanseatic League. Merchants from Visby had established Gutagard, a trading post at Novgorod. At first German merchants also operated from Gutagard, but in the early 13th century the Germans established their own trading centre at Novgorod, called Peterhof.

The earliest documentary reference to a German trading federation dates to c. 1157 in London when Henry II of England exempted merchants of the Hansa in Cologne (Köln) from all tolls in London and gave permission to trade at fairs throughout the country 1.

In 1241, Lübeck, which had access to fishing grounds in both the Baltic and the North Sea, formed an alliance with Hamburg, which controlled the salt trade routes to Lünenberg, thus giving the two cities virtual control over the important salt-fish trade. They were joined by Köln in 1260. In 1266 Henry III granted the Lübeck and Hamburg Hansa a charter to operate in England, and in 1282 they were joined by the Köln Hansa, thereby creating the most powerful Hanseatic colony in London.

During the next half century, the Hansa consolidated its eastern and western routes with confederative agreements. Lübeck remained the principal city for this trade and in 1356 the first general diet of the Hansa was held, giving official status to the Hanseatic League.

Naturally, Lübeck’s location on the Baltic gave it access for trade to Scandinavia and (via Novgorod) to Kievan Rus’. This created friction with Scandinavia, who had previously controlled these routes. This was settled by means of a treaty with the Visby Hansa, which granted Lübeck merchants access to Novgorod, where they built a kontor (office) at Peterhof.

The league traded timber, furs, resin (or tar), flax, honey, wheat, and rye which were brought from the east and sent to Flanders and England. Cloth and manufactured goods travelled in the opposite direction. Copper ore and iron ore came from Sweden, which also exported herring.

Expansion in the East Baltic

During the 12th and 13th centuries German colonists settled in various towns on and near the east Baltic coast, including: Elbing, Thorn, Reval, Riga and Dorpat, all of which became members of the Hanseatic League. (see map)

Most of these towns were granted Lübisches Recht (Lübeck Law) which meant that the townspeople had to appeal in all legal matters to Lübeck’s city council.

The Livonian Confederation of 1435 to c. 1582 was comprised of what is now Estonia and parts of Latvia. The Confederation had its own Diet (Hanseatic parliament); and all of its major towns became members of the Hanseatic League.

Between 1361 and 1370 the Hanseatic League fought wars against Denmark. At first this was not successful and in 1362 the Hanseatic cities at the southern coast of the Baltic sea lost the First Danish-Hanseatic War in the Battle of Helsingborg and in 1365 made a peace with Denmark at Vordingborg.

However, in 1368 the cities of Lübeck, Rostock, Stralsund, Wismar, Kulm, Thorn, Elbing, Kampen, Harderwyk, Elburg, Amsterdam and Briel signed the Confederation of Cologne for war against Danmark and Norway.

The second Danish-Hanseatic War resulted in the sacking of Copenhagen and Helsingborg and forced Valdemar IV, King of Denmark, and his son-in-law Haakon VI, King of Norway, to grant the league 15% of the profits from Danish trade in the subsequent peace treaty of Stralsund in 1370. This treaty gave the Hanseatic League a virtual monopoly of trade in the Baltic.

War between the Hanseatic League and Denmark broke out again during the years 1426 to 1435, and Copenhagen was bombarded twice in 1428. This war was finally resolved in 1435 by the signing of the Treaty of Vordingborg which renewed the privileges of the treaty of Stralsund.

Ironically enough, by the beginning of the 16th century the expanding Swedish Empire had taken control of much of the Baltic trade, Denmark had regained control of its own trade and the Hanseatic presence in Novgorod had ended.

The “Bremen Cog” from the Hanseatic era 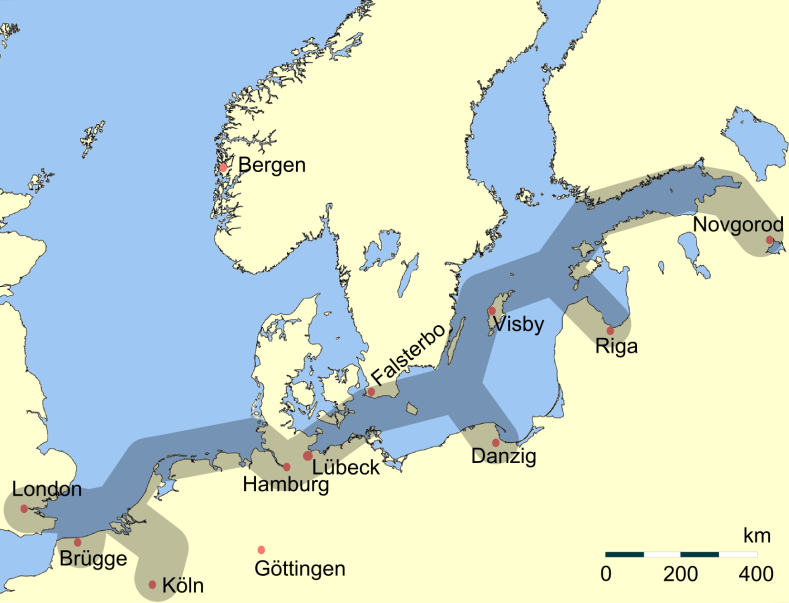 Main trading routes of the Hanseatic League in
northern Europe. Image: Wikimedia Commons
(click on the images to enlarge) 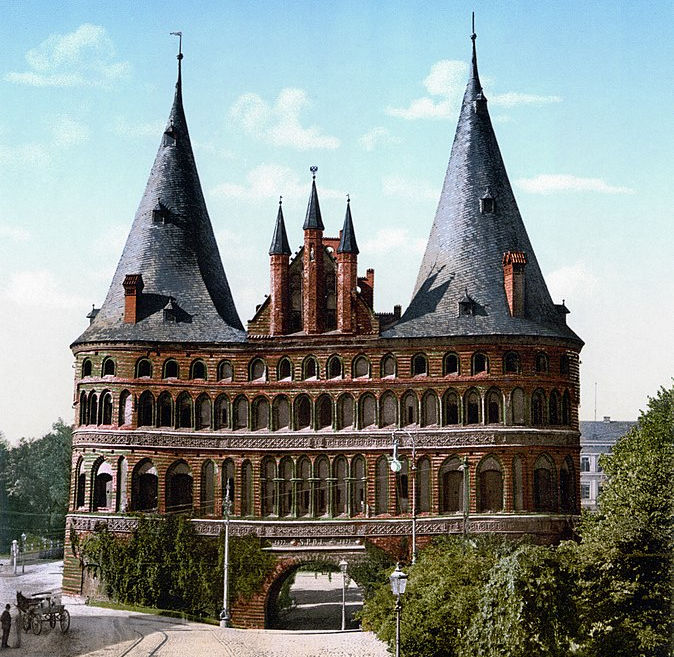 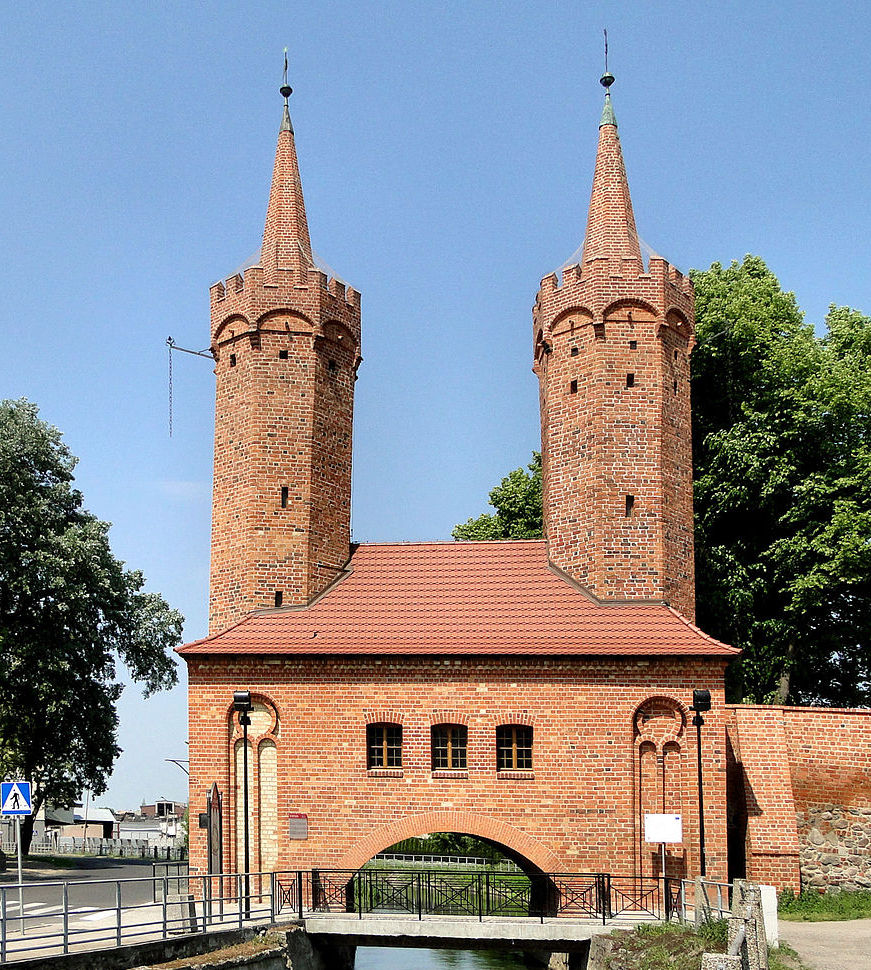 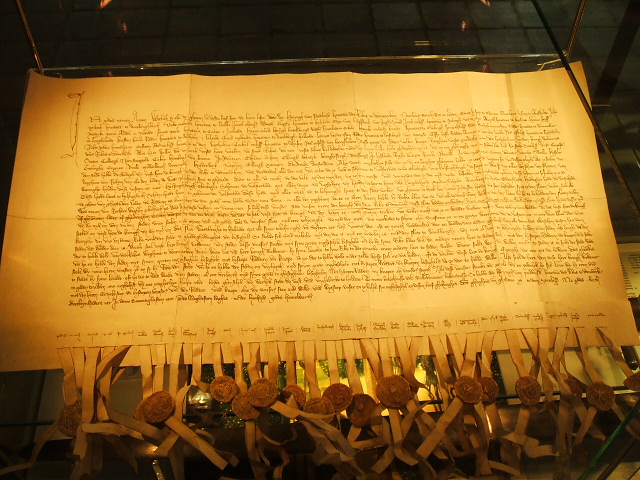 The Peace Treaty of Stralsund in the Stralsund Museum of Cultural History
Image: Wikimedia Commons

1. “[A] grant of about 1157 […] conferred perpetual protection upon the homines et cives Colonienses. As long as they paid estblished dues they were to be treated as the king’s own men and no fresh charges would be levied on them without their consent. By this time they had some form of corporate organisation with a headquarters in London […].” in Lloyd, T. H. (1991). “The winning of the Hanse franchises, 1157–1361”. England and the German Hanse, 1157–1611: A Study of Their Trade and Commercial Diplomacy (revised ed.) CUP, p. 15. ↩